Defining Moments in the History of the United States of America.

The psychological overview of The Four Symphony panels regarding how they are to be performed and the contents that’s associated with their names and the information that is required for each performer, who must have this knowledge in order to realize a performance.

Symphony No. 1, is called “Fall” because the fall ends with a symbolic destruction of the agrarian world, its harvest nourishes the planet from winter to winter, from storing commodities and a variety of energy-sources that carry us through the fall and winter seasons.

The color bars are representatives of the light spectrum. The yellow surface with its flares represents the Sun. Its surface is massive, and when the ensemble is queued to move from the rim into the Sun, its implied energy-force will create a gravitational pull on the ensemble as it moves through the inner-space of the Sun’s surface and its source-objects. Each bar is constructed as a light spectrum and are composed with long and short sonic events. The dark sonic elements are mobile, therefore they move toward the light sonic elements which are stationary or sustained elements. Some of the dark and the light sonic elements have an extended-line, which indicates that those sounds are to be longer in accordance to the length of the extended-line.

The silver rim that surrounds the Sun’s surface, represents the symbolic luminous and thermal flares that radiate from the Sun.

Each performer should map their instrument to the Fall panel, or any panel being performed.

For the artists to navigate a performance, I suggest using the concept of large and small cycles. The individual musician should create their cycles (large and small) independently and secretly. The musicians should always begin at the rim, the area of the silver flares.

The rim is considered to be a transparent sonic-field, devoid of rhythmic or percussive accents, without sonic impact in the execution of the music on the rim.

On cue, the performers will move from the rim into the core surface. The musical activity at the core is massive and explosive, and its dynamical and emotional ranges are large. The character of the music when entering the core surface of the panel follows the same principles and theories of the “black hole.” It is an artistic paradigm that parallels the scientific and philosophical ideas of the “black hole theory.”

When the ensemble is cued to return to the rim the musicians must re-enter in the proximity of where they first left off from the rim when first entering the Sun’s surface.

A description of the music on the rim is something similar to that of an image one sees when looking from a distance at a light-post in a fog or snowstorm. One sees a halo image around the light surface. The musical properties around the rim should simulate the character of that image.

The musicians using the Ankhrasmation language scores will use scientific information that is specific to that score and the scored symbols in order to create their performance. The laws of art making in creating a music-object are also governed by science but not limited just to science. Apart from the practice of composition and creation these principles are executed in the realm of performance where their inspiration allows them to create a fresh investigation into the area of creativity; where the performers’ imagination, fantasy, and their dream-state constructions introduces new information.
The color spectrum referenced in Ankhrasmation language scores, such as yellow might be considered as a sunflower, or a banana, or a cantaloupe, or any object or idea that’s imagined that can be represented by the color yellow. The color yellow can be identified scientifically by its numerical number. One such case is the electro-magnetic visible light waves. The color dark-red to yellow 700nm to 600nm, and yellow to blue 600nm to 500nm, and from blue to dark-purple from 500nm to 400nm. These numbers can be transformed into musical properties. Also, any other imaginary color construction created as a spectrum by the musicans is available for use in color reference and performance, which should be mapped out instantly in the musicians’ mind and articulated in the present moment instantly. An ensemble could choose to perform one panel or all four panels, or any combination of the panels to construct a performance.

The surface of the winter panel has a spike crossing its center, the top right-end of the spike is pointed upward and it’s bottom left-end is pointed downward. Also the surface has a sonic-belt that starts in the back of the Sun and loops over across the front surface of the Sun. Then it descends just under the center of the spike and turns a bit to the left. And it further descends downward until it passes the Sun’s thermal flares at the bottom of the score. Afterwards it enters back into the Sun’s surface.

The sonic-belt enters Sun’s surface from above the Sun’s thermal flares and its descent beginning at the color spectrum with the yellow-gold going through to the light blue color. The yellow-gold ribbon descends in a curl shape, looping around the spike.

The gold white blue ribbon on the left side descends from the bottom of the color spectrum at the light blue color point; and descends, creating a loop that connects the yellow-gold ribbon just above the spike at the dark blue color point. This is the first of three loops and is the largest of the three.

The Sonic-belt continues its downward movement descending below the spike as it bellows out forming the second loop. The left side of the loop is formed with gold and purple color lines, which connects the right and left ends of the loop. The third and the smallest of the loops also bellows out from the right side and is constructed in an arch like curve with the color silver and has a six-point black star near the top of the loop.

There are two satellites positioned opposite of each other, one in the West and the other one in the East.

There are two sonic-strings, one constructed with purple dots coming from the left side of the Sun near the western satellite and it moves upward and disappears into the Sun’s surface near the top of the Sun. The second sonic-string is constructed with gold dots and is located to the right of the purple sonic-string. It too descends into the Sun surface. Notice that from the top of the Sun’s surface on the right side of the yellow-gold ribbon are gold shaped patterns with large and small dots that form different types of loops.

This sonic-belt and the sonic-strings are used as major musical sources and its elements, which are: colors, shapes, and symbolic image-formations. These elements are spontaneously transformed into music by the musicians.

Frist the performers must map their musical instruments to all the elements i.e. colors, shapes, symbolic image-formations, Sonic-belt, Sonic-string, spike, satellites, rim, thermal flairs and the surface of the Sun. And in order to enhance the quality of the music it is required that each source composed on the panel must be mapped differently and secretly by the musicians in the ensemble. 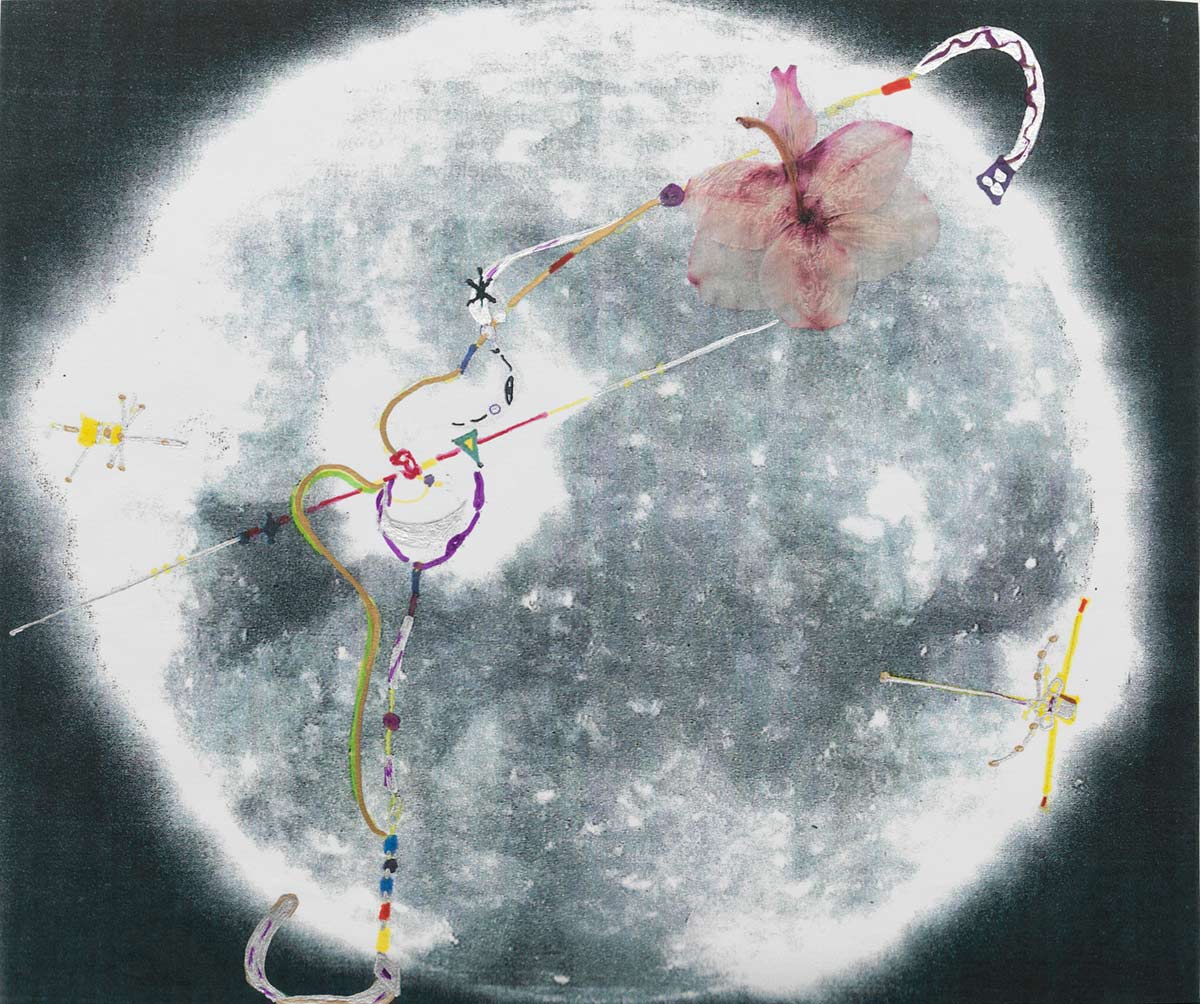 What has been added to this panel is the purple transparent flower image, located in the top right area on the Sun’s surface. In addition, the Sun’s surface is constructed in light and dark hues.
Summer is the harvest season for the food source on this planet. The seed is planted into the Earth’s dark soil, that seed sprouts up from darkness to the light and matures.

The mood of this panel is ceremonial and is of the harvest and blooming seasons. Therefore the performance associated with this panel, Symphony No 3: Summer should be festive, gratitude and storing. These qualities represent how the musician should approach the surface of this panel in performance. Also, the sonic flares in this panel have a larger diameter than any of the other panels.

The difference between Symphony No. 2 and Symphony No. 3 is one of psychological understanding, such as cold and hot or short and long seasonal days. 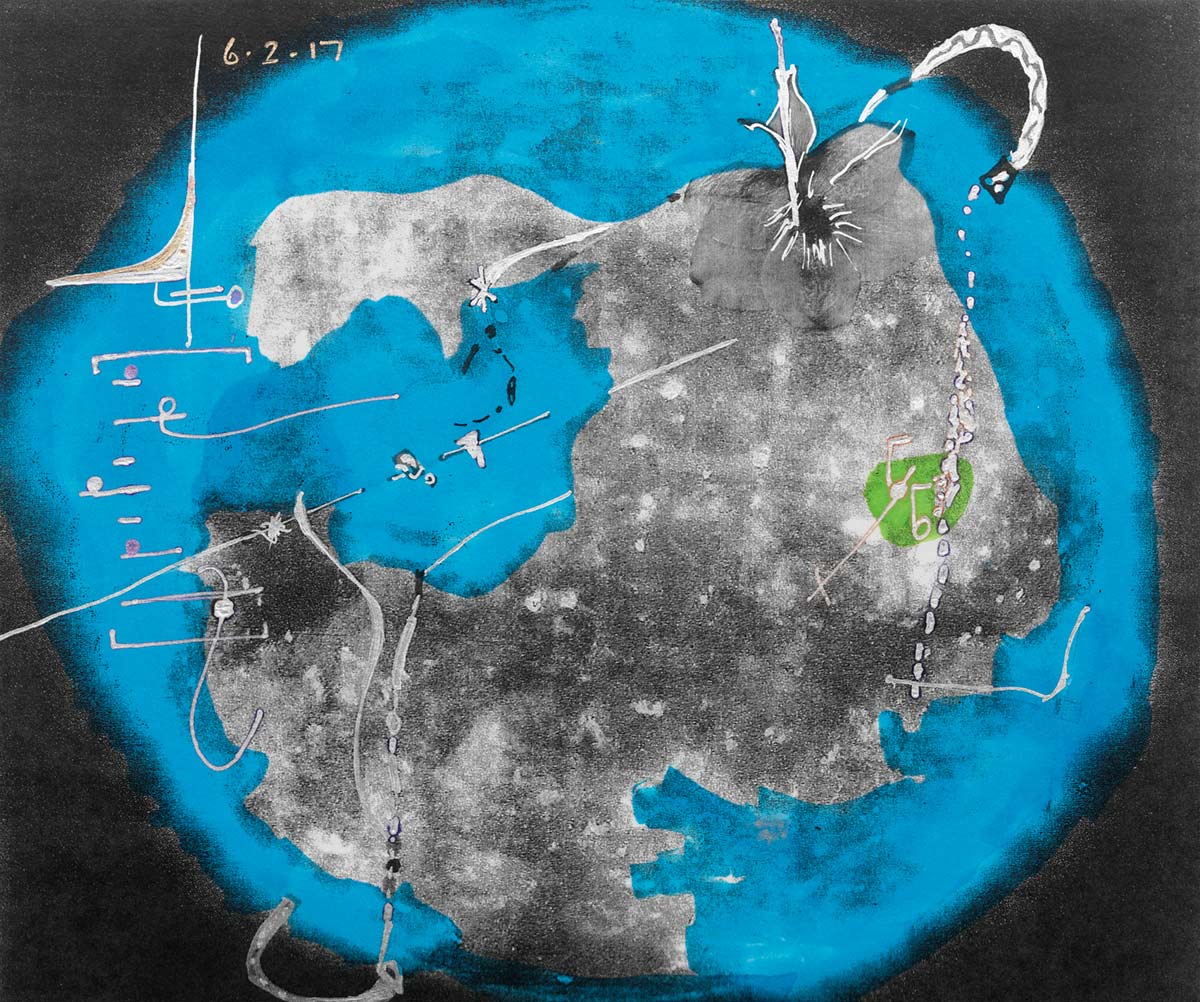 For the first time now the outer perimeter in this panel is blue water, leaving no solar flares, and its surface area has become deeply submerged in the blue water.

The sonic string with its loops and the spike are still present on the surface of the Sun but with three new images added.

To the left in the water is velocity-unit No. 4 and just under the velocity-unit No. 4 is a music-tower. In the upper right area is another figure that looks something similar to sprouted seed, stem, and leaves that extend up into the blue water area.

The music tower with velocity-unit No.4 has a numeric figure at the top of the velocity that is a 6.2.17, which refers to the number of musical elements that are to be created. The number 6 asks that the performer creates six musical phrases, with a short silence at the end. Afterwards continuing with number 2 in the equation, which indicates that the performer is to create two new phrases. The next sequence has 17 phrases and when competed finishes the music in this area. Whenever there is a velocity-unit with a music-tower, such as in velocity-unit No. 4, is always performed in conjunction with the material in the music-tower below. Which consists of long and short sonic elements distributed over seven units in the tower.

Symphony No.4 is about the season for development, planting of seeds for food and the beauty design just for sight; including the senses of awareness, and knowledge of the world.

The blue represents water and all ideas associated with water, such as wave-forms, strength, power, revitalizing (as in thirst), ideas of transportation, the ecosystem of marine life, and those imaginary elements that can be associated. The green is a symbolic gesture implying vegetation, forestry, shelter, and photosynthesis.

The predominant character of Symphony No. 4 is water, and therefore its musical properties should be distinctly different than the other three symphonies. And is harder to be realized than Symphonies No. 1, No. 2, and No. 3.

For a deeper explanation of how to perform the Four Symphonies panels, see the performance notes that explain Symphony No. 1.